Taken from a manuscript prepared by J.P. Evans in 1835:

“There are no natural boundaries to their clans; the subjects of different clans being mingled. Those of the same clan are considered as belonging to the same family. In fact this relationship seems to be as binding as the ties of consanguinity. An Indian can tell you without hesitating what degree of relationship exists between himself and any other individual of the same clan you may see proper to point out. A man and woman of the same clan are not allowed to become man and wife. This appearance of ancient custom is yet prevalent to some extent, and the disregard of it disgusting in the eyes of many.”

Clan members are considered brother and sisters.  It is, therefore, forbidden to marry within your clan.  In addition, when seeking spiritual guidance and Indian doctoring, it is necessary to name your clan.  Seating at ceremonial stomp dances is by clan, as well.

Rules and laws are not enforced by the town government, but rather by clans.  If a member of one clan offends another clan , the offended clan has the duty of retribution.  The right, or obligation, of a slain person’s clan to claim a life from the offending clan is a Cherokee practice believed to be one of the many ways of maintaining balance and harmony in the world.

The ancient Cherokee believed there are seven levels of spiritual attainment or achievement and each clan represented one of those levels.  Membership in a particular clan did not mean that the members of the clan were in some way blocked or held at a particular level of spiritual development or attainment. The clans and their members were simply meant to represent a balance of the spiritual forces that made up the world of the Ah-ni-yv-wi-ya, “the Real People”, the Cherokee. All members of the society could participate in the ceremonies and were all viewed as equals. 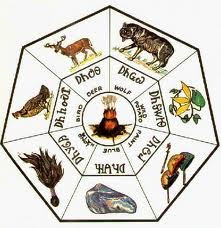 The Long Hair Clan (whose subdivisions are Twister, Wind, and Strangers), are known to be a very peaceful clan.  They are the teachers and keepers of tradition.  The Cherokee have a Peace Chief and War Chief government.  The Peace Chief usually comes from this clan (Like our Peace Chief Standing Bear in our SIM). Prisoners of war, orphans of other tribes, and others with no Cherokee tribe are often adopted into this clan, thus the name ‘Strangers.’  Gilahi is short for an ancient Titlvgvnahita, the warrior womens society, meaning something that grows from the back of the neck. Those belonging to this Clan wore their hair in elaborate hairdos, walked in a proud and vain manner twisting their shoulders proudly.  The Clan color for the AniGilohi is Yellow and their wood is Beech.

Were known to be farmers and gatherers of the wild potato plants in swamps (hence the  name gatogewi = “swamp”), along streams, and swamps to make flour or bread for food for the village, and were so named after them.  They are keepers and protectors of the earth.  Members of this clan are known to be ‘keepers of the land,’ and gatherers.  The wild potato was a main staple of the older Cherokee life back east (Tsa-la-gi U-we-ti).  The Clan color for the AniGatogewi is Green and their wood is Birch.

Members of the Deer Clan are known as fast runners and hunters. The Deer Clansmen are the keepers of the deer, deer hunters and trackers, as well as keepers of the deer medicines.  Even though they hunt game for subsistence, they respect and care for the animals while they were living among them.  They are taught, for instance, that before killing a deer, you should apologize to the deer for taking its life and explain why you were doing so. These prayers or apologies were directed toward “Awi Usdi”, “Little Deer”, the deer spirit protector.  Little Deer spirit was the protector of the deer.  If a hunter killed a deer needlessly and without asking the Deer Spirit’s pardon, Little Deer would give the hunter rheumatism so that he could no longer hunt.  Deer clansmen were expected to excel as a hunter and tracker and would be taught tanning and to be a seamer.  The Clan Color for the AniKawi is Brown and their wood is Oak.

Members of the Bird Clan (also called the Red Tailed Hawk Clan) are the messengers.  They are the keepers of the birds, sacred feathers and bird medicines.  It was believed that birds were the messengers between the world and the Heaven World or between human beings and the spirits, therefore the Ani Tsiskwa were usually called upon to be the messengers for the village.  They were keen observers and adept at interpreting the messages brought to dreams by birds.  Any earned Eagle feathers are presented by the members of this clan, as they are the only ones able to collect them.  The most sacred bird for the Cherokee was the eagle and its feathers were considered sacred and vital to many ceremonies especially anything relating to war.  Killing the eagle for its feathers involves the entire village, but under the tutelage of the Bird Clan and conducted by one special individual, the Eagle Killer, who was trained in the proper method for killing an eagle. The eagle had to be killed only in winter or late fall after the crops were gathered and snakes had retired to their dens. If an eagle was killed in summer, an early frost would kill the corn and the eagle dance would so rile snakes that they became extremely dangerous!  After the fourth day of a ceremonial hunt by the Eagle Killer, on that fourth night, the Eagle dance was performed. In addition to bow and arrow, the Ani Tsiskwa were skilled in using blowguns and snares for hunting birds.  Their color is Purple, and their wood is Maple.

The Blue Clan (also known as the Blue Holly Clan) is considered the oldest clan.  Those belonging to this clan were keepers of all children’s medicines and caretakers of medicinal herb gardens.  They are known for a medicine from a bluish colored plant called a blue holly, and were so named after it.  This clan has produced many people who are able to make special medicines for the children.  This clan is also traditionally the builders.  Their color is Blue and their wood is Ash.

A ni wo di (The Paint Clan)

Those belonging to this Clan make red paint.  The tribe’s medicine men, Didahnvwisgi (healers) and Adawehi (wise men), traditionally come from this clan.   The Paint Clansmen are prominent medicine people.  Medicine is often ‘painted’ on a patient after harvesting, mixing and performing other aspects of the ceremony.  The Clan Color for the AniWodi is White and their wood is Locust.

The Wolf Clan is the largest clan providing most of the war chiefs and warriors. Ani’-Wah’ Ya are protectors of the people.  The wolf clan are keepers and trackers of the wolf and the only clan who could kill a wolf through special ceremonies and wolf medicines. The Clan color of the AniWaya is Red and their wood is Hickory.

We are a sim in Second Life®